How to add some OSL on the Millennium Falcon. 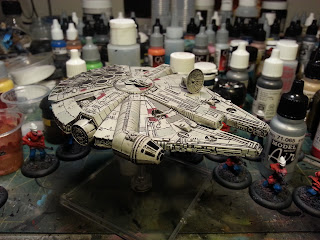 Ok as you all already know I got the Fantasy Flight Games Millennium Falcon early this week and thought I could improve it a bit with a little OSL on the thrusters.
This will take you roughly 15 min depending on your skill level of your airbrushing. If you do not feel too confident airbrushing without masking the model use poster tack to mask the model or tape.

What your gonna need is white paint and a light blue paint. I used Vallejo Air Sea Blue and P3 Mordian White. 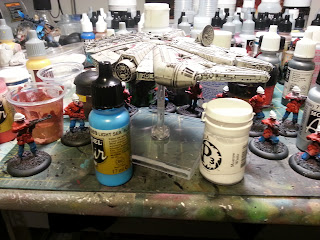 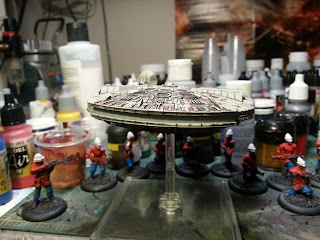 Then start laying down some white down and feather it just past the edges. Don't worry the blue will cover most of the white. 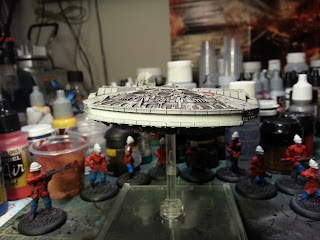 Then apply the blue next and same process feather it past the edges covering the white paint. Then mix 2 parts white and 1 part blue then apply it in the center of thrusters blending it out to the sides but not covering all the blue. And that's it your done! Let me know what you guys think. 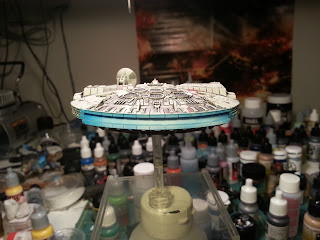 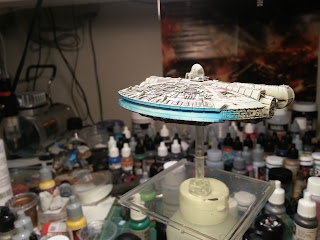 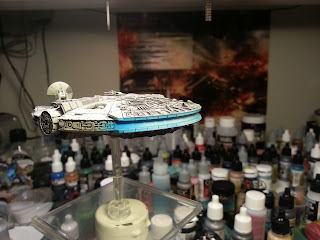 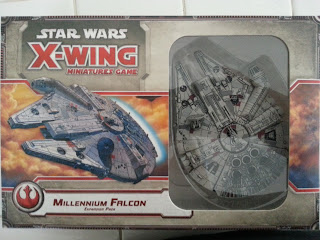 Hey everyone! Well Fantasy Flight Games released the new miniatures yesterday and I picked up my Millennium  Falcon today. They also released the Slave 1, TIE Interceptor, and A-Wing.
But today I am talking about the baddest and fastest freighter ship in the galaxy the Millennium Falcon! 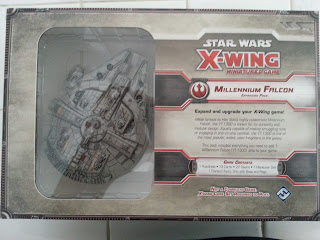 The expansion pack goes for $29.99 USD at my FLGS Game Kastle and the box is huge! Almost half the size of the starter box set. The ship is very detailed for a mass produced painted model and the quality is awesome. Inside the box you get the typical base for the ship but larger and 4 pilot cards Han Solo, Lando Calrissian, Chewbacca, and a generic pilot called the Outer Rim Smuggler.
Each with it's own special stats and cost like the other ships of course Lando and Han are expensive point wise. You also get 14 Upgrade cards with 3 what I call crew cards Luke, Chewbacca, and Nien Nunb all with some type of upgrade. 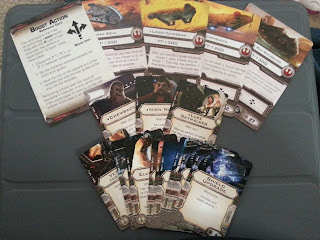 But back to the model. Scale wise it seems to be very close to scale with the other ships and it seems FFG is taking pride on that. Not like other games where the scale is so off it is a shame.
So here are some more pictures of  YT-1300 and some scale size of the other ships from Eddie of Mortis Forge who bought all the new Expansion sets last night. 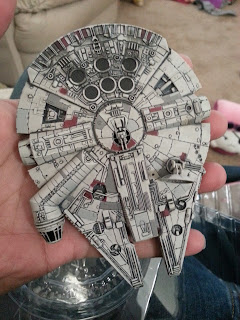 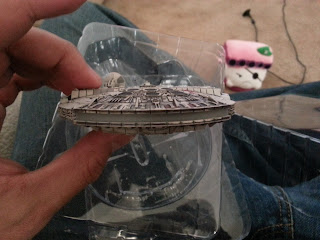 I gotta fix this! Some OSL maybe? 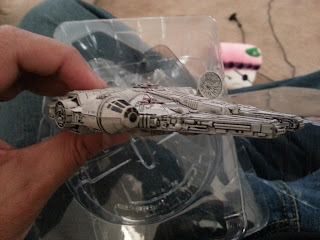 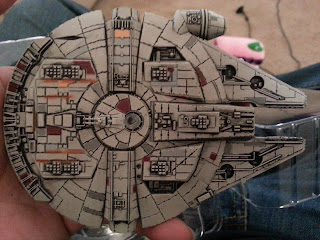 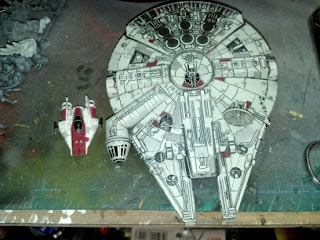 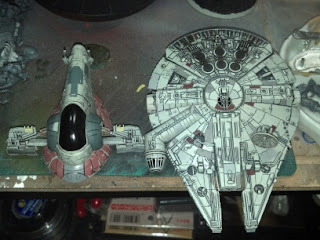 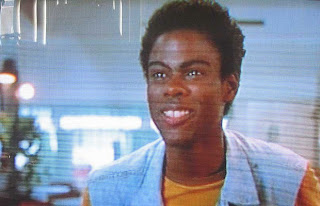 Or should I say "How much fo one rib?". Meaning how much would Death From The Skies really worth? 10 bucks!
Really it would.  I can see why some people got nerd rage not just on the price but the whole direct sales.GW knowing once people glanced at it at their FLGS or GW store they would do a hard pass!
And GW would loose out like they did on their How to paint books.

If GW just did a special White Dwarf issue like they did with the Blood Angels there would be no gripe from Independent Resellers and customers and GW would save face with everyone.
My point you ask? Well WD cost roughly $10.00 USD and has roughly 140ish pages. DFTS cost $33.00 plus shipping of $9.00 with 72 pages. That's still close to 70 pages they could add like battle reports, Adds,and other games like WHF and Hobbit stuff! All for $10.00 bucks! The $33.00 I don't see how they can justify the cost especially when it's not a hard cover book.

They just reprinted stats of each army from their codex and threw in a reprinted gallery of "Some" of the fliers. My beloved Dark Angels fliers or Chaos Helldrake's are not even in the book?!?! Remember both of those codex's was released before this pamphlet. They could've at least threw in some Forge World fliers in to at least make it worth the hard earned cash we spent on this but like GW raise prices cause they answer to stock holders and not their customers. Hell only 25% of the book is new information with a story battle,missions and manouvers and flier traits. That's it!
The rest is reprinted information from all the codex's. Baaah!

Oh well that's my gripe lets talk about the pamphlet oh I mean Compendium in a positive light.
Like I mentioned its 72 pages and breaks down as
The Battle for Cardrim.
- A story that involves the White Scars vs. the Orks and to make things interesting the Necrons.
-A army showcase of each army involved at Cardrim.

Burning Skies
-Rules and Traits for each army Fliers.

Bestiary
-Reprinted stats of some fliers

That's it folks. The battle story is a good read and army showcase gives you a visual feel of each army  involved in the story. The 4 new missions gives you a variety of game play to throw in the mix on game nights and local tournaments and with the Burning Skies gives you a in-depth rules and traits for each army fliers and is like the Warlord Trait section in the rule book but for fliers.
The book has color pictures of most fliers and is printed on the same paper as most codex's.
For Space Marines if your a Codex player good news you get the Stormraven.
Here are some pictures of the new Death From The Skies 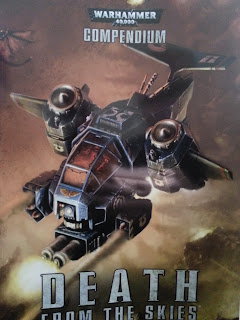 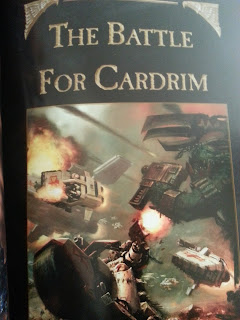 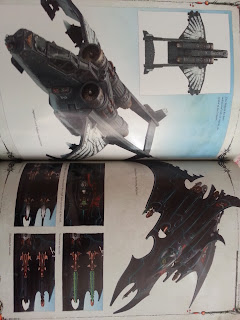 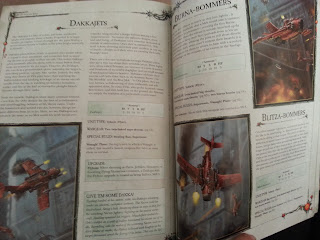 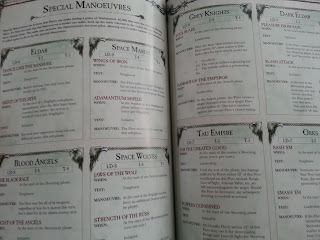 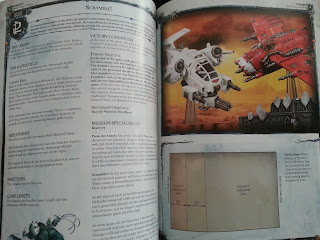 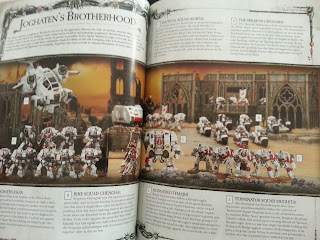 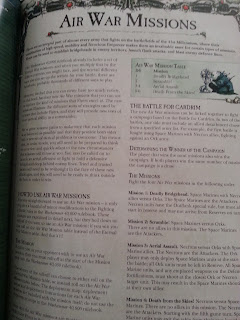 Man am I excited about Fantasy Flight Games new release for X-Wing on Feb. 26th. My FLGS posted this news on their website and I had to share this with you all.
This is one of the games I love to take a break from 40k or painting and is really easy to play and set up. I recommend you try it out at your FLGS and let me know what you think?

GreyDeathOne
Collecting figures/miniatures off and on since 1984 and mostly from the Citadel line. I been collecting and painting Dark Angels since Rouge Trader days. Building my Dark Angels force for 6TH Edition.